Behind the 8 ball with Windows 8

You will be assimilated

Microsoft's newest OS, Windows 8, is not getting a warm welcome and, much like the Vista introduction, Windows 8 is seeing a lot of people trying to go back to their familiar OS. Interestingly, there is something different about this new version introduction, or should I say interjection, and the problems that many are having with doing a downgrade once they've upgraded to Windows 8. It isn't a simple process to go back and it's an almost insurmountable procedure to downgrade with a new machine preinstalled with Windows 8. 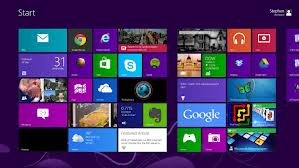 Visions of cattle being herded into a coral or lambs to the slaughter start coming to mind. There is no doubt that Microsoft is trying to direct users into what it sees as the future of computing. That future includes systems and procedures that only a few users are exposed to presently. A world where all computer devices are touchscreen or hand gesture directed and we log into a database of cloud computing programs. If you are already using this technology then Window 8 is just a natural progression forward but if you're not then it can be a little frightening.
This future is not only influenced by computers and smart phones but most any technology based equipment including television, automobile, medical, or any device or mechanism that sends or receives information electronically or wirelessly. What better way to train the public user then to clandestinely move them toward that future in a way that restricts or limits any departure from that course of training.

Move slow or they will see you

It could be that Microsoft has hurried the process a little faster than what the average user is willing to accept. The words being used to describe Windows 8 are annoying, frustrating, irritating, and baffling. A recent survey by Avast shows a large number of folks are not willing to follow this Pied Piper, especially with such a great departure from what they recognize or are accustomed to. While it is possible to train a group of people by slowly and covertly guiding their actions and behaviors; one must also consider that the degree of change and the time to influence those changes are directly affected by the size of the group.

With Widows 8, Microsoft may have turned the corner too fast, causing a high percentage of users to fall off the bandwagon. This doesn't mean Windows 8 will not find acceptance, only that Microsoft may have inadvertently slowed the inevitable progress of the general public in adapting to, and the eventual acceptance of, the advancement of information technology utilization.

One way or another

Not upgrading to Windows 8 or downgrading from Windows 8 is not going to stop or slow down technology's march to the future. We are behind the eight ball when it comes to technology and the gradual change of user interfaces and how we access and take advantage of that technology. The reluctance to move to Windows 8 is more of a natural resistance to change than it is with the technology itself and, as it has happened in the past, change will come. The question is, Will we be able to utilize that technology or will the fear of change and departure from the familiar hold us back from engaging ourselves in the learning curve it will take to become masters of the technology available to us?

Windows 8 may, eventually, gain the acceptance it needs to bring the general public closer to the threshold of total technology utilization, either through necessity or by limitations placed on us by software giants such as Microsoft. It may take another OS being introduced in order for the public, at large, to go easily down the road of acceptance, one that doesn't make such a drastic demand on users to depart from what they perceive as normal. In any case, technology will still go forward and we will need to keep pace so we can make use of all that technology has to offer. If that means learning new ways of doing everyday tasks and accepting interfaces and processes that are not familiar to us then that is what we must do