Just because it sounds good....

A term, which you may have heard of, in the IT arena that is gaining a lot of momentum, is SDLC, Systems development life-cycle. Like many other IT terms its use is more of a vernacular acronym in the IT community then a pragmatic approach to system's development.

While the concept of breaking down a project's development to its most fundamental parts may be a sound idea, most project developers understand that an IT project is greater than its individual 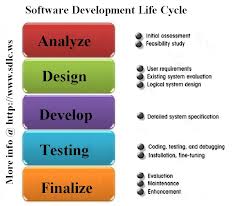 components.  Working through a project often involves agile or incremental methods that allow for self-organization within a team in order to maximize efforts in an evolving project's completion. Unforeseen roadblocks are inevitable. The project's organization plans for adaptation, by responding through group efforts and interactions by the individuals working on the matrix of a project's completion, can overcome those obstructions.

Are you sure you got that?

One of the greatest obstacles to working on system or application development projects is perceiving the concept of the project as it is conveyed. A conveyed concept is not always the concept that was conveyed.  A number of projects have to branch out in unplanned areas or completely change paths and methods because the original concept was not confirmed in its entirety. Understanding a concept from the view point of the one presenting the concept can be tricky. This is why there should be a method that confirms, with a high level of confidence, the initial concept.

The project manager, once the conveyed concept is comprehended, must then convey the concept to the individuals responsible for delivering the completion of the project concept. If at any level of the development chain an individual or team does not understand the concept with a high degree of confidence then the whole process begins to break down.

The needs of the many...

While it's nice to compartmentalize the various parts of a development process, it is not constructive to isolate those components that are working on a common conceptual development. If one part of the process becomes mired then there should be flexibility that allows for collaboration between all those involved, including the one who presented the concept as a project.

The goal or the completion of the concept should be the focus and not the various methods being employed to attain that end. The methods might, and most often do, change with an ever evolving environment in the technical universe. Limiting the progress of a project because we want to stay inside of a box of tasks is not beneficial to the goal.

"Anything that can go wrong — will go wrong"

SDLC is a good scaffolding method to use when approaching a project but it should not be the only determining or planning process. There are too many factors that can influence the life cycle of a project. If we have a clear and concise understanding of the concept , our goal, we can then define, analysis, plan, budget, and develop, that concept. In our planning we can allow for staged development and reporting on our progress while always remaining flexible to internal and external influences.

While control is important, there are a number of uncontrollable influences. Subsequently, response to change in order to attain the goal is the most critical element in any IT project management.